From Mecaflu team
Jump to navigation Jump to search

The theme "Instabilities, multiphase turbulenec" deals with the phenomena of multiphase transport from the point of view of the instabilities induceded by the movement of particles, the effects of turbulence, the phase change, the interfaces and free surfaces as well as the complexe of geometries.

Instabilities in trajectories of spheres, disks, ellipsoids and bubbles ; transition to turbulence in wakes, receptivity of linearly stable flows

We focus on the instabilities in wakes and their effect on the trajectory of the particles moving in the fluids under the effect of gravity. The activity benefits from a specific spectral code developed on the basis of the theoretical analysis of the breakage of axisymmetry due to the transition to turbulence. This is a very widespread situation affecting any solid object that is indeformable or deformable but axisymmetric at rest, placed in a Newtonian fluid and exposed to gravity. The low cost and the precision of the simulations allowed us to be the first or among the firsts on subjects as fundamental as the exact prediction of the different regimes of trajectories of spherical particles [2-ZD15], disks [2-CBD13], elipsoids in fall or in free ascension. Some publications are references (article Jenny et al., JFM 2004) and our results serve as a benchmark to validate multi-particle simulation codes at the KIT IFH [2-UD14]. Our database is public and accessible by the scientific community. The published state diagrams illustrate the effects of the transition on the trajectories and allow to compare the numerical and theoretical predictions to experimental observations. Currently, work is ongoing with the study of the stability of the trajectory of a bubble (deformable). We were the first to obtain a marginal stability curve that takes into account the deformation of the bubble due to the instability. Two other key issues were also addressed during the five-year period. Direct simulations of the transition to three-dimensionality in the wake of a cylinder have made it possible to explain experimental observations dating from the 1980s [2-ABD11,2-ABD14]. A numerical and theoretical study resulted in the proposal of a new theoretical framework explaining the turbulence in flows not undergoing linear instabilities [2-SDD11]. 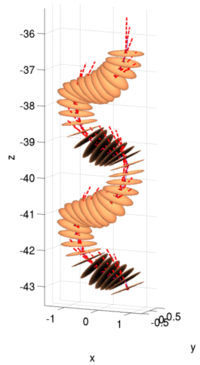 We are giving a significant contribution to the development of the NSMB code in the consortium of CFD Engineering and RUAG Aerospace (Switzerland) as well as a number of university laboratories (IMFT and ETH-Lausanne laboratories, ETH-Zurich, TU München, UniBw, München). This code is also used at KTH, by Airbus-France and EADS-ST. Thanks to the consortium, our contributions are made available to several European research teams. To increase flight safety and reduce the number of accidents related to the effects of icing, and to improve the certifications of aircraft to fly in all weather conditions, it is necessary to develop an effective icing simulation tool. Prediction of the accumulation of ice resulting in a degradation of aircraft performance is one of the major challenges for the scientific community in aeronautics. We developed an original approach based on an Eulerian water droplet transport formulation, a model of partial differential equations for the thermodynamics of icing, and for the first time a level-set methodology for the accumulation of ice. The level-set method has proven to be very effective in both 2D and 3D and greatly simplifies the multi-layer icing for black ice [2-PLH16, 2-PDLH15, 4-HPHL15]. The modeling of unsteady turbulence where persistent coherent structures are found at very high Reynolds numbers and chaotic structures due to the dynamics of unorganized turbulent movements remains a very active field of research. We are interested in hybrid models RANS-LES (DES, DDES, IDDES, SAS, PANS) or advanced models of OES, AOES type which are implemented in the NSMB solver and tested on numerous configurations in external or internal aerodynamics. Of particular interest is the prediction of shock wave interactions - turbulent boundary layers and fluid-structure interactions (fluid-elastic instabilities in tube bundles, aeroelasticity). We were able to demonstrate the relevance of 2D simulations for fluid-structure coupling compared to 3D or LES [2-EHCC16, 2-SLBB16, 4-EHDS16, 2-SMHD14, 4-HDPD14] models. We also benefit from the high level of activities in the field of bio-medical in Strasbourg. We build tools to extract realistic geometries from medical imagery that we applied to small animal imaging [4-CG4F16, 4-XHCG12]. We have thus studied the transport and deposition of particles in airways and a collaboration with the University of Monash for the lungs and the IR4M for the blood networks is in progress.

The experimental part of the ITM theme concerns the study of thermal plumes called "feathers" in Rayleigh-Bénard turbulent convection and microfluidics. "Feathers" are particles of hot or cold fluid that detach themselves from thermal boundary layers and carry most of the heat between these two boundary layers. The "feathers" are visualized by the LIF (Laser Induced Fluorescence) method. This method was developed in collaboration with G. Castanet of the LEMTA. The first results obtained are encouraging and allowed to evaluate the temperature of the «feathers» and their behavior within large-scale circulation [4-FRC15]. We are improving the technique to be more quantitative. The influence of the rotation of the cell on the large-scale circulation and the behavior of feathers is studied in collaboration with the team of E. Bodenschatz of the Max-Planck Institute of Götttingen. In the microfluidic thematic, fluorescent sensors for the high-frequency screening in microsystems are being developed with N. Dumas of the SMH team of ICube. The aim of this project is to determine the hydrodynamic conditions necessary to form monodispersed droplets and to carry out biological tests on these droplets. The applications targeted are medical analyzes by screening. A collaboration with P. Villa of the Integrated Biological Chemistry Platform has begun and collaborations with biologists will be developed.

Our skills acquired in the field of turbulence modeling and particle transport have led us to consider more finite research on the three-dimensional simulation of free-surface flows within hydraulic control structures as well as on modeling the transport of Suspended Solids (TSS) intercepted through pollution control structures such as basins. We have thus been the precursors of the introduction and the use of the CFD in the field of the modeling of the separative and unitary sanitation networks. We have shown how to implement the instrumentation for the control of the structure (making it possible to obtain the data essential to the managing authority) by using the CFD tool perfectly mastered by the team [10-IFVD14 , 2-IDFV14]. This research led to the creation of a startup (3D Eau) from the MECAFLU team of the laboratory (and particularly José Vazquez and Matthieu Dufresne). The objective of the startup is to implement in the field of engineering the know-how in CFD developed within the team for the study of complex hydraulic structures. A contract of valorization was signed between the laboratory and the company. 3D EAU was awarded at the Emergence 2014 competition for the creation of innovative technology companies (Ministry of Higher Education and Research).